Transparency Market Research (TMR) has published a new report titled ‘Viral Clearance Service Market – Global Industry Analysis, Size, Share, Growth, Trends, and Forecast, 2018–2026.’ According to the report, the global viral clearance service market was valued at US$ 261.9 Mn in 2017 and is projected to reach US$ 902.1 Mn by 2026, expanding at a CAGR of 14.9% during the forecast period. The report suggests that increased outsourcing of viral clearance testing studies, rise in focus on early clearance of virus in biologics, increased burden of regulatory requirements, rise in R&D expenditure, expansion of economies of the world, and increase in disposable income are likely to drive the viral clearance service market from 2018 to 2026.

Introduction of several new target therapies into the market has necessitated the testing of target therapies, and this has created demand for viral clearance across the globe. The field of bio-similar products and biologics has also undergone rapid advancements in recent times, which has further fuelled the global viral clearance market. Rise in incidence of several infectious diseases has also propelled the global market. 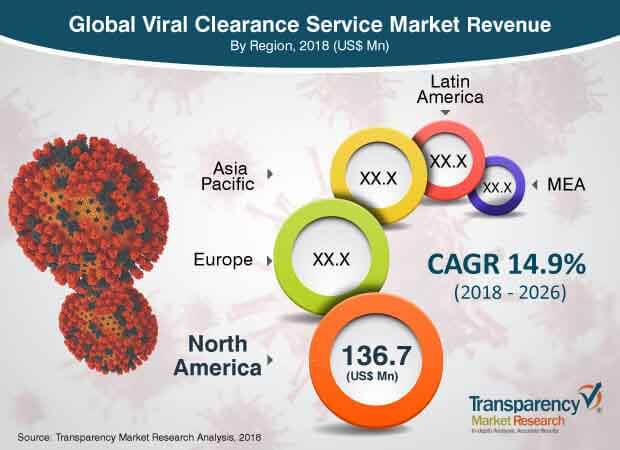 The report offers detailed segmentation of the global viral clearance service market based on application, method, end-user, and region. In terms of application, the recombinant protein segment is estimated to account for a prominent share of the market. Introduction of recombinant DNA technology has expanded the potential of the biologics market. Emergence of promising drug candidates has made several global and regional pharmaceutical players venture into the biologics R&D. Increasing rate of approval of biologics by various regulatory agencies, such as the US Food and Drug Administration (FDA) and European Medicines Agency (EMA), has positively impacted the market. Both U.S. FDA and the EMA have put in place requirements for viral safety in relation to biologics, and a degree of harmonization has been achieved through ICH guidelines.

The report has foretold the world recombinant protein products market to find greener pastures created with constant efforts and collective investments directed toward the development of recombinant proteins products with specific applications. More than US$ 1.5 Bn have been invested by top 10 pharmaceutical giants in the last five years, which has translated into capacity expansion and focused research and development.

Asia Pacific held a prominent share of the global viral clearance service market in 2017. The viral clearance service market in Asia Pacific is expected to expand at a rapid pace, primarily due to improving health care infrastructure, rising private and public investment in life science research, and imposition of stringent regulatory requirements in countries such as China and Japan. Less competition in Asia Pacific is encouraging a large number of viral clearance service companies to enter the market. The market in the U.S. has witnessed high quality standards in the pharmaceutical industry, increased expenditure by governments on research and development in health care, rapid expansion of the biosimilars and biological market, emerging biopharmaceutical industry, and rise in demand for outsourcing are key factors driving the viral clearance services market in North America. Europe follows North America in terms of market share, due continuous innovation in medical technology and increasing investment by key players for research and development.